HDCP (High-Bandwidth Digital Content Protection), is a technical specification for digital content protection formulated by Intel in 2003. It is mainly used to prevent the illegal recording of high-definition movie content transmitted through digital interfaces, such as DVI, HDMI® and DisplayPort™. Using this technology, audio and video content is encrypted to prevent illegal recorders from restoring and stealing the original HD audio and video.

If HDCP is not available on any end of the Transmitter, Receiver or Repeater link, it is not possible to play high-definition audio and video content. The picture quality will be reduced to 480p or, even worse, the playback will fail completely. With the increasing demand for high-definition content, technology that supports digital encryption is becoming more and more popular. Currently, most of the consumer multimedia audio-visual and entertainment products on the market, such as transmitters, receivers and video game consoles, use HDCP.

Manufacturers that want to use this protection technology must first join the Digital Content Protection (DCP) Association and pay an annual fee of USD 15,000. They then purchase a “KEY” for content encryption, with the cost depending on the quantity purchased (see Table 1). 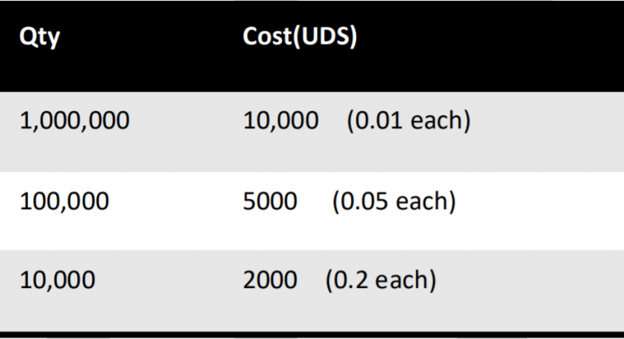 The "KEY" contains a special Key Selection Vector (KSV), which is a critical link in the HDCP encryption process. The KSV is a binary value consisting of twenty "0s" and twenty "1s". The Transmitter and the Receiver check each other's KSV to ensure that the connection is legitimate. Each device has a unique set of KEYs, which is saved in a list of DCP Association.

To prevent the KEY from being cracked or leaked, a "revocation list" which contains all cracked or leaked KSVs has been set up. The Transmitter will check whether the Receiver's KSV is on the list. If so, the connection is considered to be illegal and playback of the video and audio content is immediately interrupted.

An HDCP system features three key devices – the Transmitter, the Receiver and the Repeater. According to the HDCP1.x specification, up to seven layers of repeaters and 128 devices can be connected in the system (see Figure 1. below).

Based on the Authentication Protocol, the Transmitter and Receiver exchange keys. This allows the Transmitter to confirm whether the Receiver is an authorized device which is allowed to receive HDCP-encrypted digital video and audio content. As part of this authentication protocol, both devices use Device Private Keys authorized by the DCP Organization to execute encryption calculations. The result is a “Km" – a shared secret value which is used to confirm whether the devices are Authorized.

There are three key steps in the authentication process:

In Part 1, the Keys are exchanged between a Transmitter and a Receiver/Repeater to ensure that the connection between these devices is legitimate.

For the HDCP cipher unit, Ks, M0, and R0 are calculated using parameters such as Km, repeater ||An.

In addition to collecting the complete list of KSVs, the Repeater will also report the DEVICE_COUNT and DEPTH in Bstatus to the Transmitter, so that the Transmitter can check whether the number of layers in the whole HDCP system and the number of the connected devices exceed the upper limit.

In Part 3, the system will confirm whether the encryption frequency and sequence of the two HDCP devices are consistent and synchronous. At the same time it generates an additional authentication mechanism.

If consumers want to watch digital multimedia audio and video content, such as a Blu-ray Disc that is protected by HDCP, both the DVD player and the receiver (TV and Monitor) must have built-in keys and the ability to execute the above authentication steps. Otherwise the high-resolution digital video content may not be available.

As part of additions to HDCP1.4 conducted in response to the update of HDMI2.0 (the most recent version is HDMI2.1), the DPC association published a protection mechanism for HDCP2.2 in 2013. This was further updated to HDCP2.3 in 2018.

A graduate of National Taiwan University of Science and Technology’s Department of Chemical Engineering, Ray Yang is a Test Engineer at GRL (Taipei). He has accumulated more than three years of experience in HDMI testing and is familiar with HDMI, MIPI, V by One and other testing specifications. He helps customers clarify HDMI problems and successfully obtain certification.